Lithium-ion batteries have come to dominate the battery market and have even become popular in motorcycles. I certainly prefer them due to their larger capacity, lower maintenance, and more compact size.

One of the most convenient parts of lithium-ion batteries is the ease of charging and maintaining them with the many smart chargers on the market today.

I recently went out in search of the best lithium motorcycle battery charger out there. This is what I found.

Compact-sized unit with a simple user interface from a tried and trusted brand. Recommended. 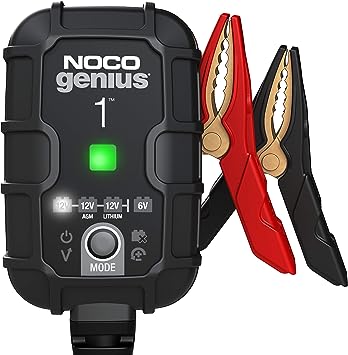 This value option has great features that protect your battery and an easy to use interface. 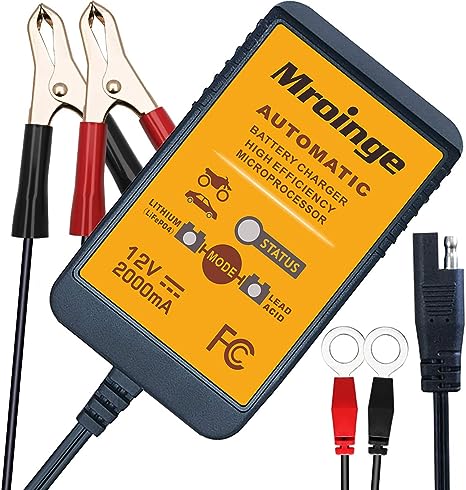 I love the Noco Genius line in general, but the Genius1 is my first choice for motorcycle batteries because it’s convenient, intuitive, and ideal for the seasonal rider.

For starters, the adapter is only 4.5 inches long, and that’s the biggest part. That means it’s both easy to carry with you as a preparedness measure while you’re touring, and it’s pretty easy to store with your motorcycle in the offseason. I know my garage is already cluttered as it is.

Additionally, I love smart chargers, and the Genius1 is one of the easiest to use that I’ve found. It has a simple LED light that changes to green when the battery is fully charged, using an integrated thermal sensor to more accurately gauge the level of charge, even in extreme temperatures.

The user interface also makes it easy to change between battery types. While I recommend it for lithium batteries, it can be used for 12V AGM, gel, wet cell, etc. Just keep in mind that lithium-ion batteries must have a Battery Management System (BMS).

The Mroinge Smart Battery Maintainer is my value pick. That doesn’t mean it doesn’t have a bunch of great features, though. For instance, the simple user interface allows you to switch between lithium and lead-acid battery in case you want to use it on your car, and the single status light lets you know when it’s done charging.

The adapter is also small and compact at less than four inches on the longest side, but the output cord is still 12 feet long. This makes it easier to access outlets and manage your battery without hassle and frustration. Similarly, the alligator clamps are the ideal size for motorcycle batteries.

Finally, with 2 Amps of output current, the Mroinge Smart Battery Maintainer charges quickly for a value model. You don’t have to worry about the quality either because Mroinge backs up their charger with a two-year warranty. 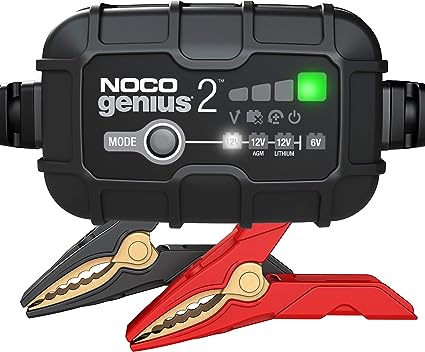 Like the Genius1, the Noco Genius2 is a convenient option for lithium motorcycle battery charging.

It’s a bit bigger than the Genius1, the adapter reaching about 6 inches long, but it’s also more powerful. It has 2 Amps of current versus the Genius1’s 1, producing 30 Watts of power compared to the Genius1’s 15. This makes it handier for those surprises when you need to charge your battery but don’t have a lot of time.

The interface is helpful, telling you how close you are to a full charge, which again saves time and hassle. The same thermal sensor accurately gauges the charge and can save you battery life in the long term.

Lastly, I like the length of the cords included. At 72 inches, the charging cord has plenty of length to plug in and reach the battery. This is especially important with motorcycles since the battery can be hard to get to. This saves a lot of frustration. 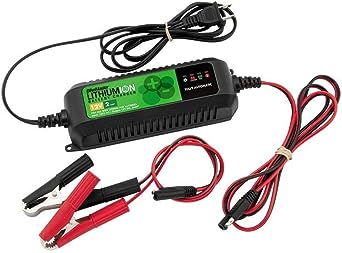 This BikeMaster charger is great because it’s specifically designed for lithium batteries, and as such, you can be sure that the smart-charging feature is accurate and won’t overcharge. It has built-in protection against not only overcharging but short-circuiting and reverse polarity as well.

I wish the adapter itself were a bit smaller as it’s nine inches on the longest side, weighing in at about 1.3 pounds. Still, the alligator clips are very compact and easy to handle for someone not used to regularly charging batteries.

Some users have complained that this charger has difficulty with batteries extremely low on charge. As a result, it’s better for handling seasonal charges of healthy lithium batteries rather than old batteries on their last legs. Altogether, it’s a specialized charger at a great value to have on hand. 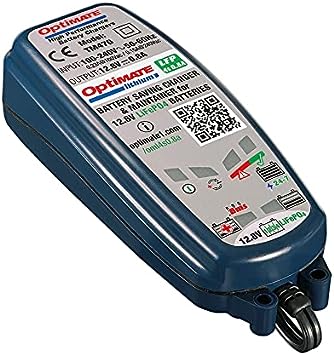 The OptiMATE sealed charger and maintainer is a top-shelf option for those who really care about maintaining their equipment. It’s a reputable and well-known name brand that you have to pay for, but it’s well worth the cost.

The user interface is extremely easy to use, providing you with all the readings to accurately charge the batteries and even a QR code to OptiMATE’s website, where you can find charging instructions and advice.

I recommend the 0.8-Amp version for most people, but if you do want super-fast charging, there’s a 10-Amp version that’s great for emergencies.

However, my favorite part of this charger is the protection it provides your battery. Specifically, I love the Intelligent Wake-Up Mode that works on lithium-ion batteries with BMS to wake them from sleep mode safely.

What Is a Lithium Battery?

You may recognize lithium batteries from electronics like your laptop and cell phone. But, motorcycles use a specific type of lithium-ion battery called a lithium iron phosphate battery, often written LiFePO4.

These batteries look a lot like the old lead-acid batteries you’d find in a car or motorcycle, but they’re, well, better. In fact, when it comes to running motorcycles, their technology is better even than other types of lithium-ion batteries.

This is because LiFePO4 batteries are lighter and more compact relative to their power output. They’re also more chemically stable and can therefore last a lot longer.

They can usually go through about 5,000 charging cycles before they start to lose capacity. Lead-acid batteries and other lithium-ion batteries can usually only handle about 1,000 cycles.

Maybe most importantly, LiFePO4 batteries produce a higher and more consistent voltage, usually about 13 Volts. That means you get a more consistent and hotter spark. Your bike will start faster and more easily and run more smoothly.

Pros and Cons of Lithium Batteries

In the case of a smart charger, the charger taps into the battery’s BMS to determine when the battery is fully charged. It will then inform you of the charging status with an indicator, usually LED lights.

Do you need a special charger for lithium motorcycle batteries?

How do you charge a dead lithium motorcycle battery?

Technically speaking, a dead lithium motorcycle battery cannot be charged. If it totally runs out of charge, it’s essentially ruined. However, modern lithium batteries feature a Battery Management System that prevents the battery from running out of juice completely.

If your battery is simply low on power and therefore not working because the BMS has turned it off, charging it is a relatively simple and intuitive task.

First, remove the battery from your motorcycle to prevent damage to any other components.

Then, plug the adapter into your wall outlet’s A/C power and attach the charger’s alligator clips to the battery’s terminals. Red is for the positive terminal and black for the negative.

Your smart charger will have specific instructions on initiating charging using its interface, but you’ll generally have to select the mode for lithium-ion charging. Similarly, it will have a specific display that tells you when the battery is fully charged, and you can remove the charger.

In certain cases, the battery may be so low on power that the smart charger doesn’t recognize it via the BMS. In this case, your charger may have an option for “force charging.” Check your charger’s instruction manual for details on how to start this mode.

If force charging doesn’t work, your battery is most likely truly dead, and you’ll have to get a new one.

How long does it take to charge a lithium motorcycle battery?

Finding a dead battery can be frustrating, but a quality battery charger can remove all the hassle.

For those who ride seasonally and need a good charger to use regularly, I recommend the Noco Genius1. If you’re looking for a budget option to have on hand, just in case, you should also consider the Mroinge Smart Battery Maintainer.